N. 05-2014 – The role of the pharmaceutical industry in the global input-output system

N. 05-2014 – The role of the pharmaceutical industry in the global input-output system

We refer to input-output analysis to investigate the global trade system and to assess the impact of the pharmaceutical industry on the world economy.

Our central findings can be summarized as follows:

1. Integration of the Global Input-Output System

The main data we use for the multiregional input-output (MRIO) system is from the World Input-Output Database (WIOD). The original WIOD has aggregated pharmaceuticals into chemicals and chemical products. For this reason, we extracted information from other resources and split the chemical industry into pharma versus non-pharma. Figure 2 shows our disaggregation strategy. Another recently available MRIO data set, EORA, is used, since it has detailed information within the chemical industry for a subset of countries. 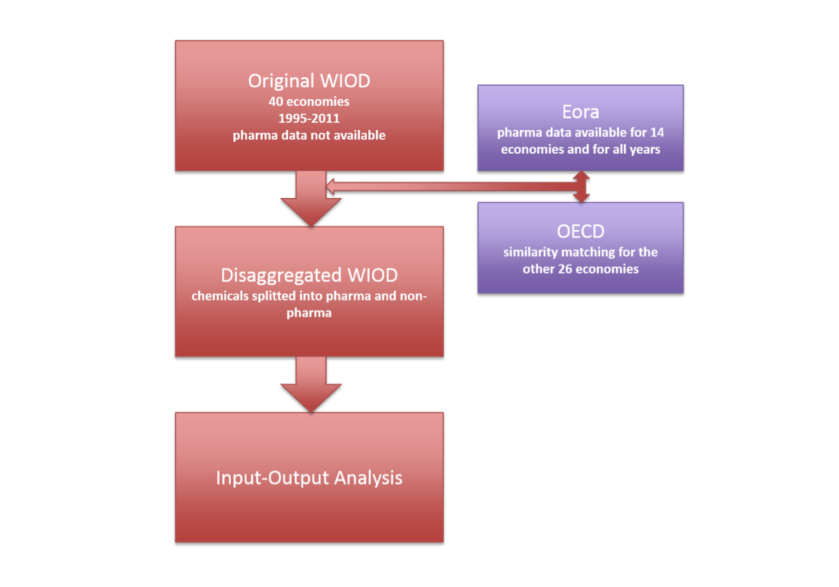 Based on the disaggregated WIOD data, Figure 2 and 3 show the global input-output system in 1995 and 2011, respectively. Notice that only the important (beyond certain flow value threshold) links are shown. As expected, for both 1995 and 2011, each cluster is corresponding to an individual economy. Because the most intense industrial linkages are still within the domestic economy. However, it is straightforward to see the system has become more integrated in terms of the density of the industrial linkages both within and between economies. 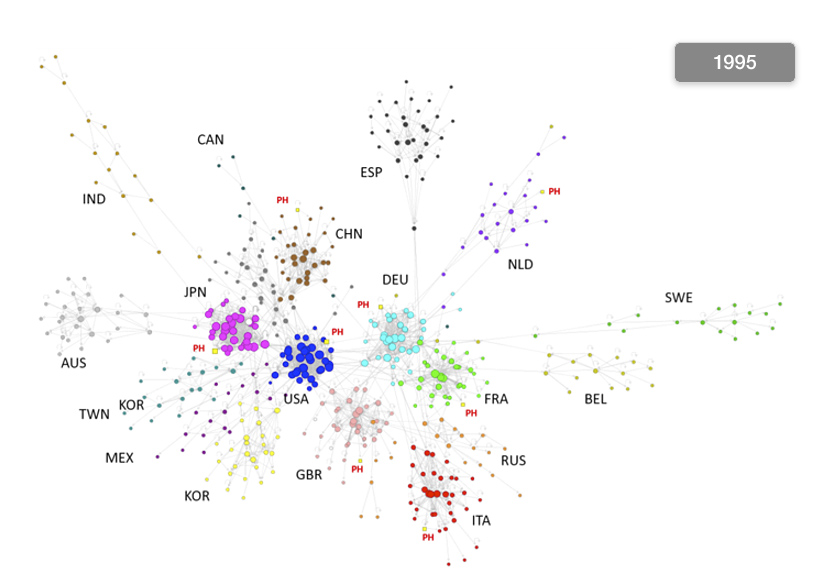 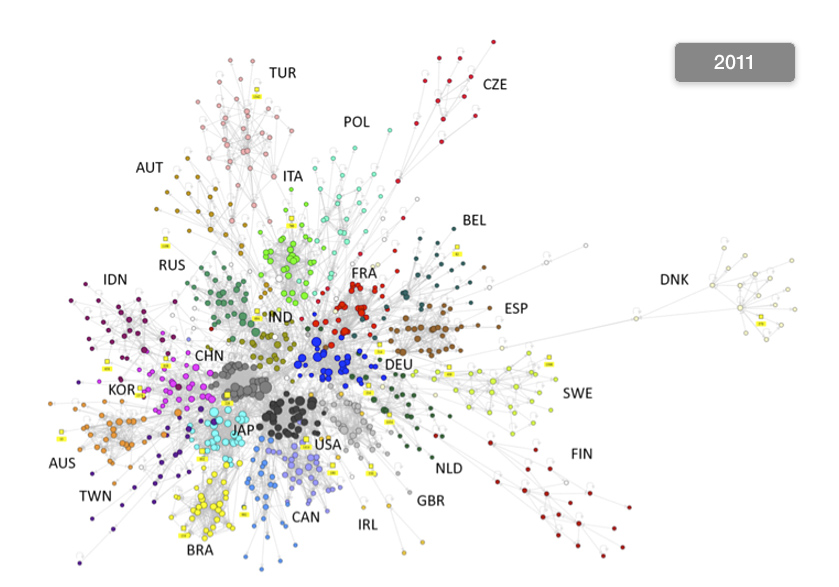 2. China’s Rise in the Asia-Oceania Community

The dynamics of the Asia-Oceania community can be roughly divided into three stages, namely, its presence with Japan’s leadership during 1995-2001, its disappearance and integration with the America community during 2002-2004, and finally its reemergence with China’s leadership during 2005-2011. The pattern is shown in Figure 1, where three years, 1995, 2002, and 2011, are selected to represent the three stages respectively. The first row shows the community maps in the three years. The America community is colored yellow, the Europe community is colored red, and the Asia-Oceania community is colored blue. Notice that in 2002 the blue community was by and large merged with the yellow community. The second row shows the community core detection results for the three years. The redder the more important the country is in reserving its community. Equivalently, the yellower the less important the country is in reserving its community. This can be used to identify the leaders in the communities (see the shift from Japan to China as a leader moving from 1995 to 2011). Finally, the third row provides a topological view of the community structure at different points in time. Again, Japan was central in the Asia-Oceania community in 1995, and it was replaced by China in 2011. 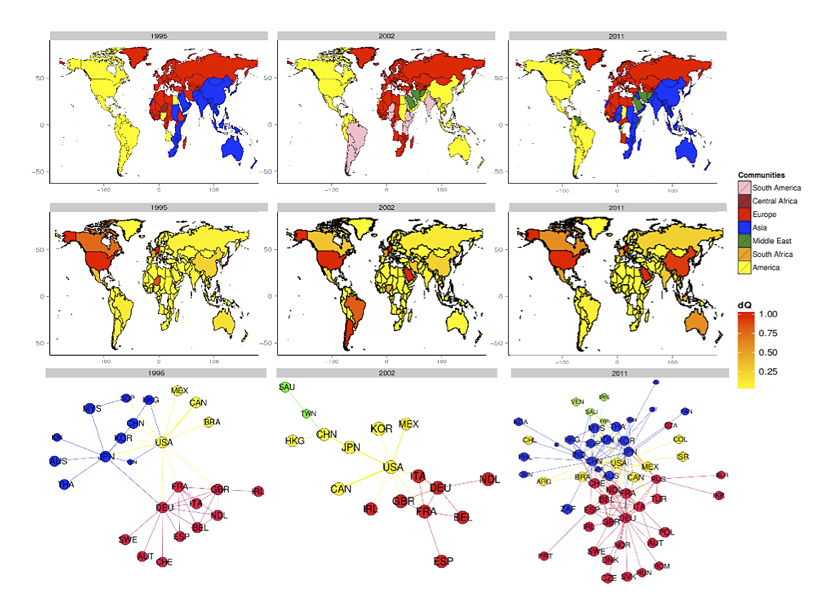 3. Globalization of the Pharmaceutical Industry

Figure 5 shows the destinations of the pharmaceutical products from USA and EU15, respectively. 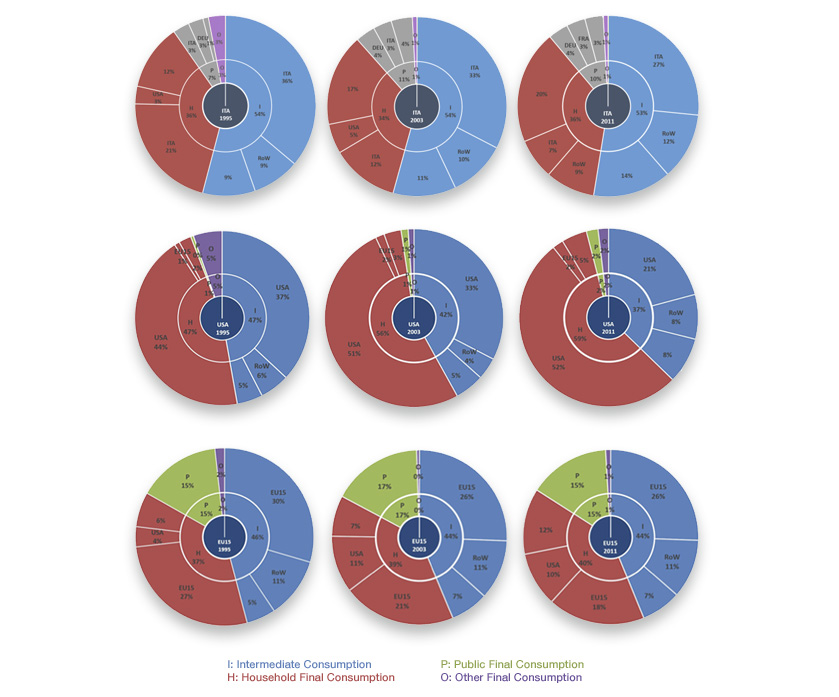 For instance, USA in 1995 had 47% of its pharmaceutical output going to the intermediate consumption, within which the top two destinations were USA itself and “the rest of the world” (economies not included in WIOD).

The shares of the four groups are relatively stable in USA and EU15. The globalization of the pharmaceutical industry is evidenced by the fact that for both USA and EU15, the share of foreign destinations has been increasing over time.

4. The Economic Impact of Pharmaceuticals

Figure 6 reports the Leontief multipliers for the pharmaceutical industry, the health work industry (including human health activities, veterinary activities, and other social work activities), and the average value of all 36 industries for China, USA, and EU15 in 2011. The main result here is that China has more impact of its industries in all the categories examined here than USA and EU15.

Figures 7-10 further divides the domestic impact of the pharmaceutical industry on different industries within the three economies. Compared with China and EU15, USA has its pharmaceutical impact more concentrated in the industry itself over time. Also, service industries such as “other business activities” matter more in the developed economies, USA and EU15, than in China. 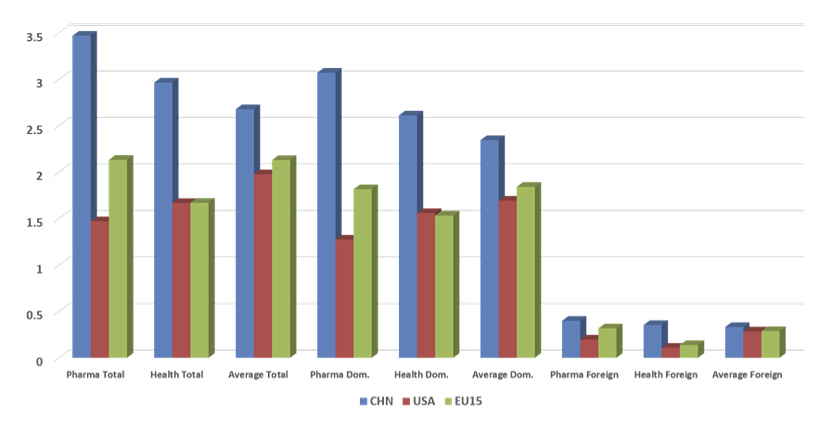 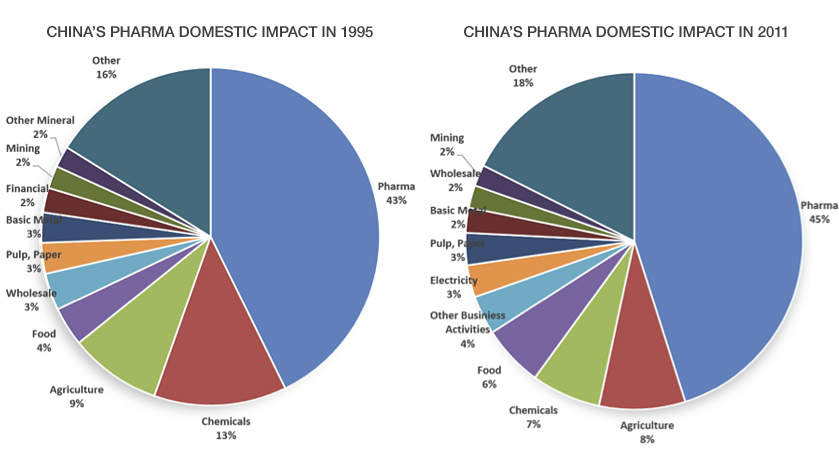 Figure 7: Domestic Impact of the Pharmaceutical Industry in China 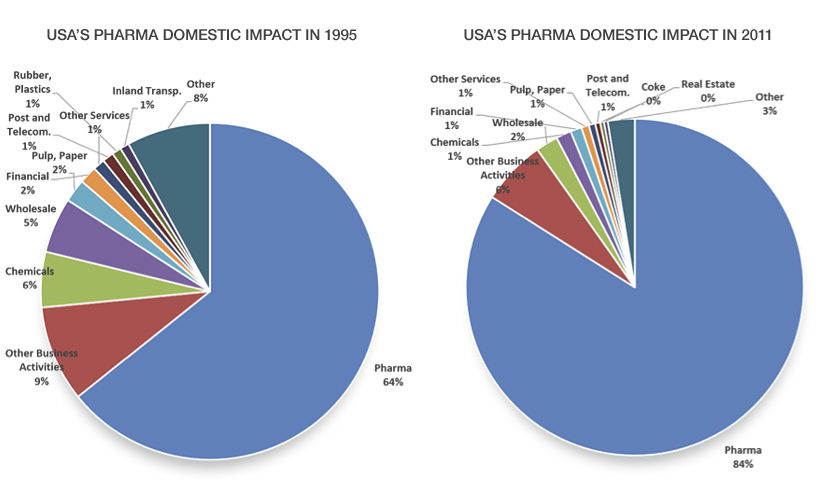 Figure 8: Domestic Impact of the Pharmaceutical Industry in USA 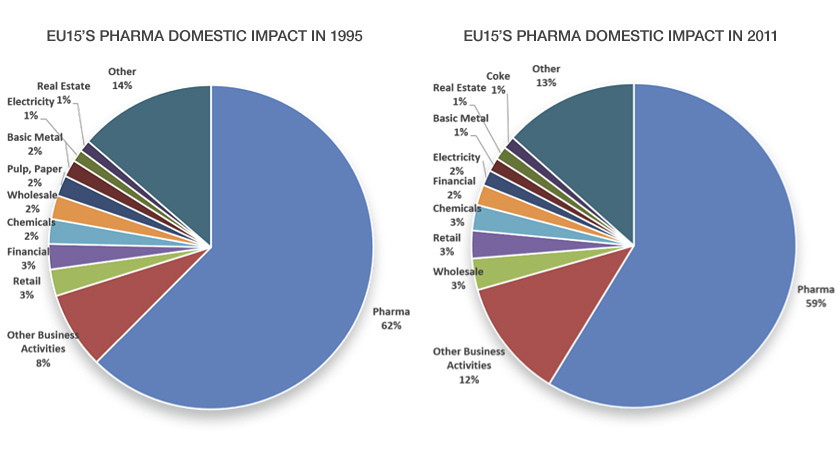 Figure 9: Domestic Impact of the Pharmaceutical Industry in EU15 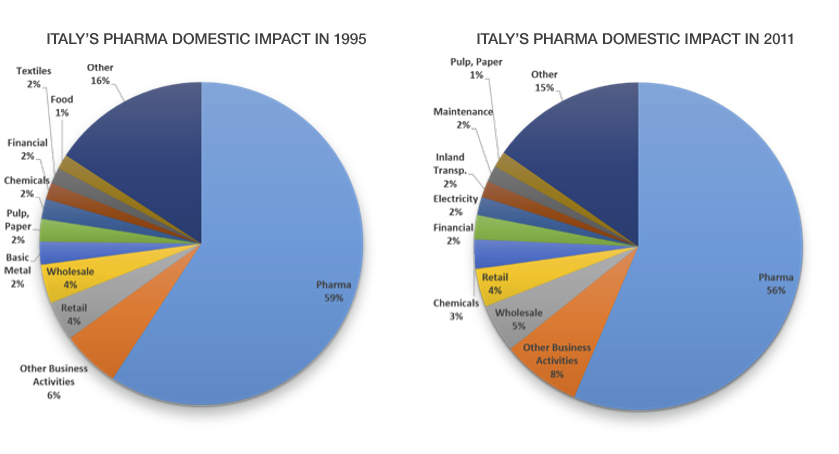 Figure 10: Domestic Impact of the Pharmaceutical Industry in Italy 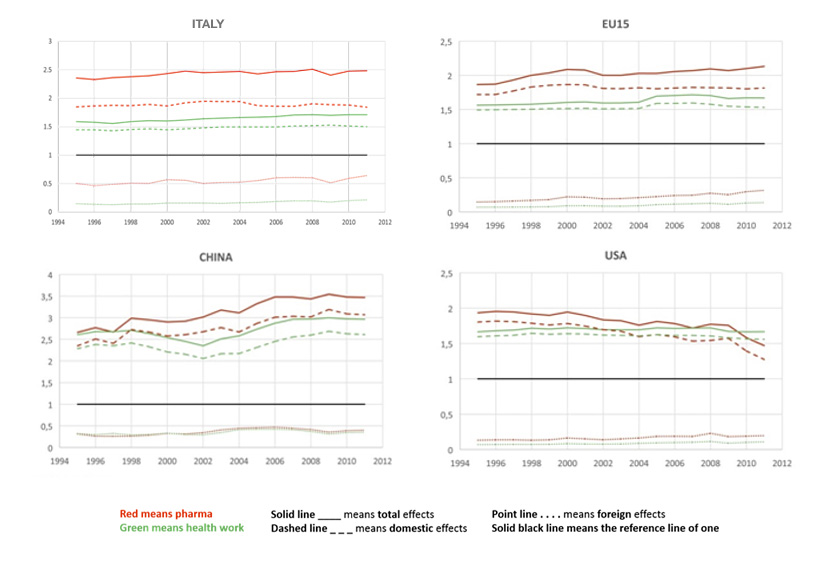 Figure 11. The Leontif’s multiplier effect of the pharmaceutical industry and the health work industry 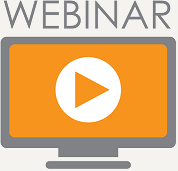 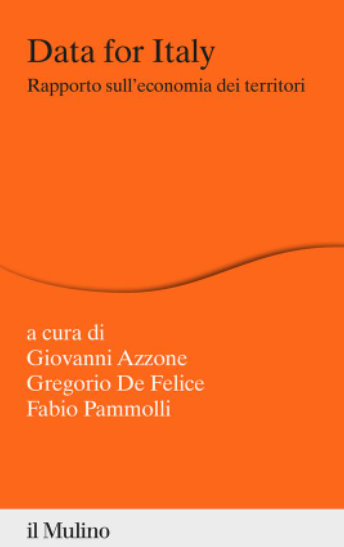